Andrew enjoyed athletics at school in North Derbyshire … triple jump, discus and shot. Hated running, but liked walking. There seemed to be no system to push youngsters towards the local clubs, but athletics continued at college in London. There he helped officiate a little in college athletics matches, but spent leisure time as referee/umpire/player in rugby, hockey and cricket. After college and marriage, work took him overseas for much of the time. Athletics took a back seat whilst rugby and hockey continued.

In 1987 a change of career direction led to teacher training and a job in Chipping Campden where ‘games’ became part of the job description despite zero PE qualifications. Being a qualified official in four sports did help!  Sports days and athletics matches at Cheltenham were almost invariably attended where he became the ‘high jump expert’, as the only one who knew the tie break procedure in detail. Rugby and hockey officiating continued in and out of school.

Having married in 1978, Eleanor had nothing to do with Andrew’s school life until she retired. In 2010 she made the grave error of looking around Cheltenham whilst Andrew looked after the high jump. She got back in time to help later in the day. Since then she has been involved and numerous meetings have had ‘two for the price of one’ from us.

In 2014 Cheltenham officials wondered if we would be a happy to help at county school events later in the season and the club’s Brewer Memorial Games. This led to more requests to officiate. When the matters of insurance and child protection came up, attendance at a Level 1 Field Judge course became necessary. This was done in 2015. Eleanor has been happy to remain at Level 1, with no ambition to go higher, although she has added track judge and race walk judge qualifications (the latter through Welsh Athletics) to her repertoire. At Gloucester we were told by fellow officials that Wales was a good place to get experience and decided to give it a try in 2017. We have tried to incorporate a visit or two into our season ever since.

Andrew quickly got to Level 2 Field Judge. The 2017 UKA Officials’ Conference proved to be a turning point. The theme was ‘Widen Your Horizons’ and one of the workshops was ‘Level 1 Race Walking Judge’ with Martin Bell and Ian Richards as tutors. This led to fairly rapid race walking, timekeeper and track judge qualifications. Race walking events started to take up more of his time, especially as he became ‘guinea pig’ for what proved to be a new course which was being developed. Level 3 followed, then Level 4 just as lockdown started. Unfortunately, age precluded any further advancement, but it was really good to be invited until he had to tell them he was too old. Now it is time to put something back as Official’s Secretary for Midland Area RWA. 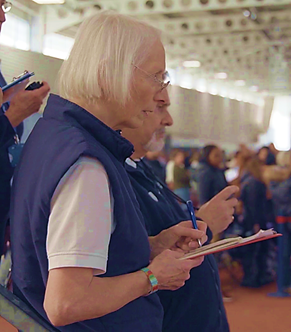 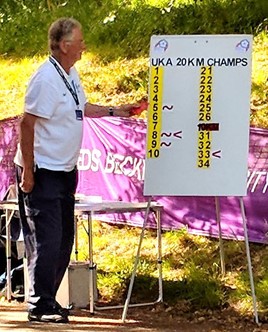 Andrew at Grand Prix of Race Walking in Leeds 2018.

As race walking is definitely an endurance event, Andrew took the opportunity to learn more at a Welsh Athletics’ endurance officials course. At the WA Officials’ Conference he ventured into photo finish judging, but seems destined to remain at a low level. Technophobia Rules OK!

Progress has been made along the officials’ pathway in the various disciplines. It was decided to add the last two (starter and starter’s assistant) a bit later. In lockdown, the course measurement qualification was gained and a couple of short courses certificated. It has been good to learn that I am not alone in qualifying for a wholed range of disciplines, having met several really highly qualified colleagues along the way who are doing the same thing.

Eleanor has no desire to don wellies and stand in a cold field or by the road, so she remains at home on endurance days. Her highlights have been the English Schools Championships where the quality and experience of officials is always so high and our niece has competed. She also remembers those events where athletes seek her out to thank, especially when some came back to the call room to thank her for looking after them so well.

Although we are not members of any club, we get regular calls from Gloucestershire, various Oxfordshire clubs, City of Sheffield (our home city), Gateshead (where our nephew is a coach and official) and anyone who knows us. It is great meeting different athletes and officials from all over the country. Masters and schools events are particular favourites, but we’ll go anywhere within reason.

We never seem to stop learning something new, but are now finding that others can benefit from what little we can pass on. From attending around 20 events per season in the early years, we were at 115 (A) and 77 (E) events in the 2018-2019 season. As with everyone else, activity is much more restricted nowadays.

Any regrets? Only one. Should have started doing this forty years ago!