Desperate to make the school athletics team back in 2008, Jenny Nesbitt reluctantly volunteered herself for the unpopular 800m event. 2 laps later and the rest is history, as she has been pretty hooked to the sport ever since!

“I pretty much didn’t get a choice in event, it was the longer stuff, which is funniy because 800m is really short now, or nothing at all. I did that first race and I was instantly hooked! I’ve moved up a bit from the 2 lap event since then, but I still get that overwhelming feeling of joy whenever I stand on a start line”.

Jenny credits her school for starting her off in the sport.

The journey to international honours wasn’t all plain sailing for Jenny, as she battled many health problems through her adolescence which hindered her progression and ability to participate in the sport. It is credit to her determination and ‘suck it up’ attitude that she continued to work back to training and racing over the years.

“Without making this a sob story, 10 years ago this month I was admitted to hospital for weeks on end battling an auto immune disease called Henoch Schonlein Purpura. It typically isn’t too severe and usually only effects young children, but for some reason I was critically ill with it and there were times we didn’t think I would make it back from the hospital. It pretty much took me out of the sport for 2 years, as I was constantly being readmitted to hospital or fighting serious infection which really inhibited my ability to complete pretty basic everyday tasks, let alone participation in physical activity”.

Jenny goes on to say that this period of time in her life was the cherry on top of the cake in terms of overcoming adversity, as in the years beforehand as battled to overcome Anorexia between the ages of 12 and 16.

“Anorexia was tough. But I want to try and turn it into as much of a positive as possible. It taught me a lot about myself and changed my perspective on how I viewed the world. Everyone has something going on in their lives, and it just so happens that unfortunately for me the idea of starving myself was better than challenging the underlying issues. It was a really dark time in my life and obviously impacted upon everything, from my education to my social life and my running.

I hope that by making people aware of my past, I can put hope into peoples lives, when they might be going through something tough. I don’t think many people would have predicted I would be where I am today 10 to 15 years ago”!

Having always taken the path less followed, Jenny’s journey to where she is today, has not been the most conventional, something she is proud of.

“I think a lot of people think I am a bit nuts. I tend to do things a little rogue, and I don’t typically have a solid plan in place! I like it that way though”!

Jenny completed her undergraduate degree at the University of Bath, studying Sport and Social Science, whilst she has just completed a Masters Degree in Sports Broadcasting at Cardiff Met.

“If I am completely honest, my post school education was dragged out as long as possible to give myself as much time as possible to fully invest into running, and it worked out ok. I shouldn’t admit this but after first year at university I think I attended 5 lectures in total for the remaining 3 years of my degree. Obviously I wouldn’t recommend this, its bad - but it worked for me”!

And she highlights that it is all about finding out what works for you.

“I have discovered over time that I am a people pleaser. I like to make people happy, but in the past this has sometimes come at a cost to achieving what I want. I think it is important to recognise that you need to do what works best for yourself, rather than worrying about what other people are going to think of you. People who care will always be there to support you. I think this is really important within athletics too. Obviously, there are times where you help people, train with people and support people, thats the beauty of the sport - but ultimately, you have to think about making decisions which are best for you”.

These words of wisdom have been fundamental to Jenny’s progression over the last few years. Having gained her first international honours in 2015, Jenny has gone on to run for Great Britain 12 times, on a World and European level, as well as compete for Wales at the 2018 Commonwealth Games. It is a resume to be proud of and something she wants to build on over the next few years. She credits her coach Chris Jones for his investment and patience over the last 5 years.

“I am an ultra competitive person, in a good way, I think! But I was determined to prove to myself and everyone that adversity is not a defining end point. You can comeback from it and be even better! I think I did a pretty good job of that. That first GB team at the Euro cross event was such a significant moment fo me in my career, and since then I have really tried to build on that. I still believe that I have a lot of potential but I constantly remind myself to look back at how far I have come. Massive kudos to Chris - has has always beleived in my ability and has invested so much time into my development, I wouldn't have achieved all of this without his guidance”.

And this year is a big year for Jenny.

Although she skipped the chance to make the World Indoor Team, Jenny was happy to take a break and get ready for the summer. Catching a flight to Flagstaff in early March, she based herself there to train at altitude and give the 5000m another crack.

“Coming out to Flagstaff was probably the best decision I made. I’ve put together a really solid 2 months of training and that is already being reflected in my performances as I have run personal bests in the 1500m and the 5000m. I think I have a way to go this year in terms of the times I can run on the track, so I am really hoping that I can do myself justice going forward”.

And as to what is next.

“I have one race left out here in America at the end of May and then I am going to head back to the UK. I will be very sad to leave but I have an exciting summer coming up and its important to get the championship season right. I am planning to race a few shorter races leading into the British Champs, and then seeing where the season takes me from there. Obviously the Commonwealth Games is a priority for me. Having grown up and gone to school in Worcester, it is as close as it can get to being a home games, so I really hope to be on that start line come August 7th”. 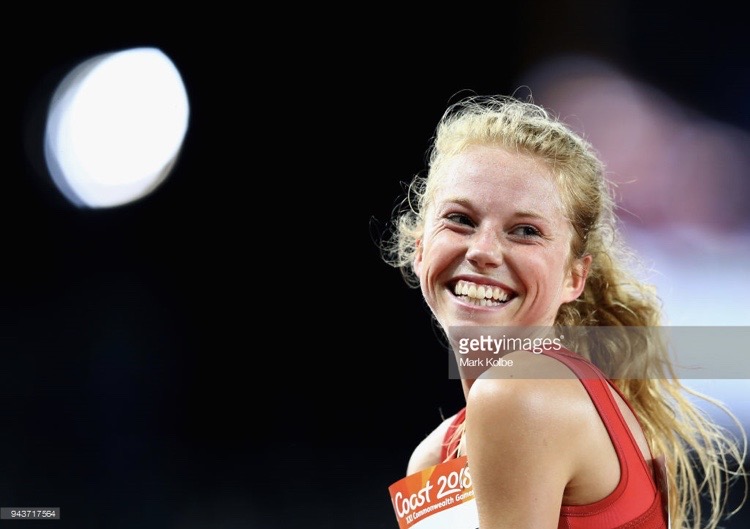 Jenny won’t have to wait long to find out if a 2nd Commonwealth Games is on the cards as the qualification period has now shut and athletes are awaiting confirmation as to nomination and selection.

“I am hoping for good news, then I will get excited! Watch this space!”